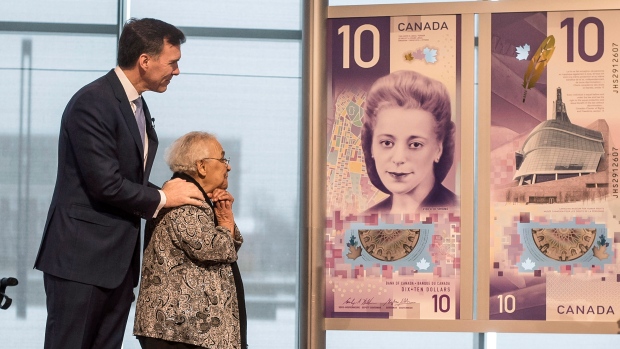 On March 8, 2018, the International Women’s Day celebration at the Central Library in Halifax, Nova Scotia was a very special one indeed. There, Finance Minister Bill Morneau and Bank of Canada Governor Stephen Poloz honoured women and African-Canadians with the unveiling of the new $10 bill featuring Viola Desmond, the Nova Scotia woman who famously stood up for the rights of black people in Nova Scotia.

Desmond’s sister, Wanda Robson, attended the event. The 91-year old had the honour of unveiling the bill to great fanfare at the Central Library and received a commemorative wallet-sized version of the bill.

Who was Viola Desmond?

Viola Desmond was chosen for the honour of appearing on one of Canada’s most-used bills because of her history as a civil rights activist in Nova Scotia. Her most famous contribution to the cause was her arrest in 1946 at the Roseland Theatre in New Glasgow. Desmond was a businesswoman and was travelling when unexpected car troubles stranded her in New Glasgow for the night. She had gone to see a movie there while waiting for her car to be repaired and sat in the “whites-only” section of the theatre. At this point in time, black people were only permitted to sit in the balcony section.

After refusing to move to the balcony, Desmond was arrested and forcibly removed from the theatre. She spent the night in jail and was eventually charged and convicted of defrauding the province due to the tax difference between the balcony seats and the lower seats – a difference of only one penny, and a difference that Desmond volunteered to pay.

Her conviction led to a $20 fine and $6 in court costs. Desmond appealed her conviction and lost, but that court case is known as the first in Canadian history where a woman challenged racial segregation.

The events in New Glasgow happened nine years before Rosa Parks declined to give up her seat on an Alabama bus, and though Desmond’s contributions to civil rights were largely overlooked at the time, she has become known as Canada’s Rosa Parks in recent years. She was posthumously pardoned 63 years after her conviction, though she died in 1965.

Why is she significant? 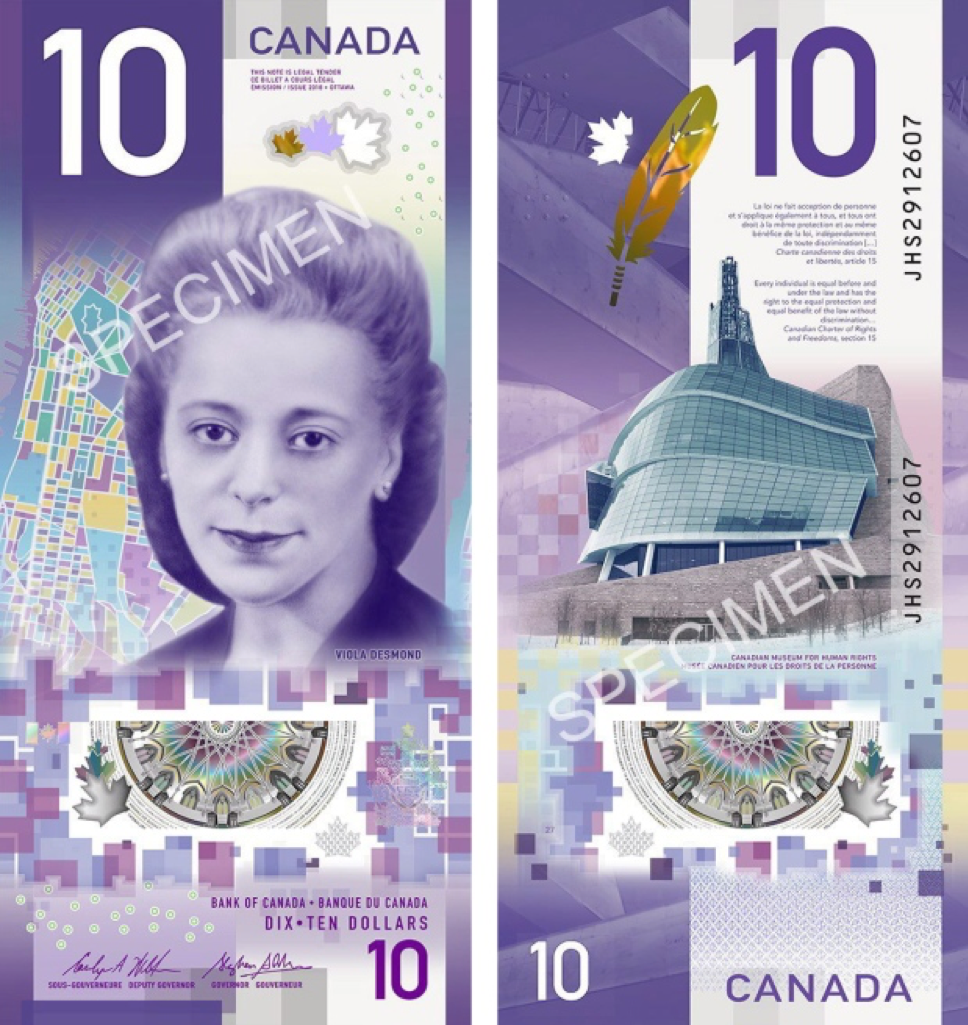 Desmond is the first person of colour and the first non-royal woman to appear on a regularly circulating Canadian bank note. In the past, only three other non-white male people or groups have appeared on Canadian tender, including The Famous 5. In 1927 these five Alberta women asked the Supreme Court of Canada whether the word “Persons” in Section 24 of the British North American Act includes females, which eventually led to women obtaining the right to be appointed to the Senate. The Famous Five were depicted on the $50 bill between 2004 and 2012 but were removed when the bill was redesigned.

Also appearing on the $50 bill was Thérèse Casgrain, a French-Canadian feminist, reformer, and senator who let the women’s suffrage movement in Canada before World War II.

Finally, Agnes McPhail, the first woman to be elected to Parliament made a brief appearance on the commemorative Canada 150 $10 bill.

While the Canadian government has honoured some women in the past on our official tender, far fewer African-Canadians have received recognition. By choosing Desmond for the $10 bill – and including Winnipeg’s Museum of Human Rights on the other side of the bill – the government of Canada recognises that the systemic discrimination that Desmond protested in 1946 was rampant in Nova Scotia and other provinces.

The USA is not the only country that struggles with racism

For Canada’s African-Canadian community, the release of this $10 bill signals a long-awaited recognition of Canada’s messy history with racism and segregation. Isaac Saney, a senior instructor of black studies at Dalhousie University, told Global News that many Canadians are more familiar with the United States’ civil rights than with Canada’s, though we had many of the same struggles with slavery and segregation.

Canada has powerful and strong-willed fighters too!

Name recognition in Canada is higher for Rosa Parks than Viola Desmond, and Martin Luther King is better known than W.P. Oliver, a prominent social justice advocate and reverend.

With Desmond’s story – which has been commemorated beyond the $10 bill as both a stamp and a harbour ferry in Halifax, Nova Scotia – Canadians are reminded that Canada struggled through slavery and segregation, that we too have a history that required strong, determined people to fight within a political system that was determined to maintain its white power and elevate and protect the privilege and the security of a few.

By including prominent civil rights advocate on one of Canada’s most-circulated bills, Canadians can now honour and thank those that fought for equal rights, celebrate our victory over hatred and ignorance, and demonstrates that Canada will no longer tolerate anything other than unity and respect to all of our citizens.

Related Topics:
Up Next

Protecting Yourself Financially While in COVID-19 Lockdown

Assess your Current Spending During COVID-19

Calculating your Net Worth During COVID-19

Should you consider a refinance during COVID-19?